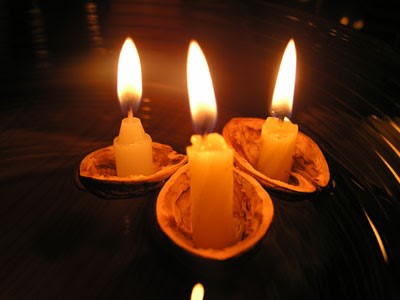 Traditionally, the beliefs on death in the Czech Republic actually start during Christmas time.

They practise several rituals and observe particular things in order to maximise their luck (that includes deferring death).

For example, odd numbers were deemed unlucky and so when setting the table for Christmas, an even number of place settings were laid.

The traditional superstations continued as it was seen to bring bad luck, or even death to a family member, if someone left the dinner table before everyone had finished their meal.  The person who chose to leave the table first might expect to die first in the new year and so everyone left the table together to avoid this belief.  They also believed that, when they left dinner, they would not cross any fields because, again, there was a belief that if they did, they would die within the next year.

Fortune telling rituals were performed at the same time.

Walnut shells were used to make small boats, in which candles were placed inside them and the shell placed on water.

The walnut shell boats that survived allowed their maker to believe they would have a long and healthy life.  The people that owned the boats that did not stand up to the water could expect bad luck.

Another ritual that took place traditionally was the cutting of apples.

Once the apple was cut in half, the shape of the core would be inspected.  If it resembled a star, the person’s family could look forward to good health in the coming year.  If the shape within the apple core depicted a cross, the person who cut the apple could expect someone close to them becoming sick or dying within the following year.

In 2011, around 79% of Czechs declared themselves as non-religious or atheist and for this reason, many secular funerals have been more popular in the Czech Republic.

Death is not a common subject that is discussed and because of many differing opinions, the topic of the afterlife is often avoided during conversations between Czechs.

For those that do not believe in the afterlife, the secular funeral service centres around the deceased person’s achievements during their life rather than anything else.  Rather than a family member delivering the eulogy for the deceased loved one, a professional speaker is often chosen to present the eulogy.

There are many Czechs that find secular funerals to be impersonal and expensive so they choose not to have one.  This choice leads to families not having an organised funeral service and not having the ability to grieve for their deceased loved ones or honour the life they led.

It is interesting to note that in 2005, 78% of Czechs were cremated and about one third of those cremations did not have a funeral service.

This is something that is being discouraged and the ‘Wood of Memories’ was launched by the Prague Cemeteries Authority, which aims for people to lay the cremated remains of loved ones within a specially delineated wood within the capital’s cemetery.

As there are no special laws or required practices to limit when a funeral or cremation can take place in the Czech Republic, there is more freedom for Czechs to decide when such an event should occur.  The embalmment of a deceased body is not usually compulsory and the scattering of ashes in the Czech Republic can take place, however, the landowner must consent to this before the scattering of ashes takes place.

Whilst the majority of Czechs are non-religious or atheist, there is just over 10% of Czechs that consider themselves Catholic.  The Roman Catholic Czechs do hold a positive view and belief in the afterlife and these beliefs go further in that the rituals they practise will allow their deceased loved ones to experience a positive afterlife.  The Catholic Czechs opt for more traditional burials for their deceased loved ones with the funeral service accompanied with music to help mourn for the deceased.

With 1% of the Czech Republic making up Protestantism, they follow the more traditional Catholic practices, such as their belief in the afterlife, however, they do not believe that they have any influence on their deceased loved ones’ afterlife.

Both cremations and in-ground burials were chosen by Czech Protestants and whilst they aimed to have celebratory or happy funeral services for their deceased loved ones, they also recognised these events as times to grieve for their lost loved ones.

Interestingly, approximately 1% of Czechs make up Jehovah’s Witnesses and they did not believe in the afterlife.

Whilst Czech Jehovah’s Witnesses did not place one type of funeral arrangement over another, it was universally felt that their deceased loved ones should be treated with respect and dignity.