What happens in a funeral? 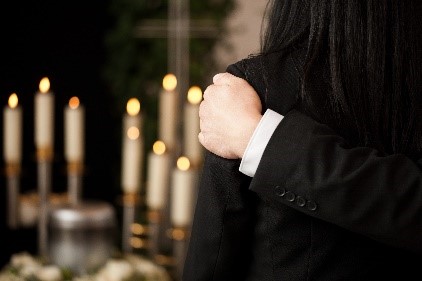 There are many types of funerals and therefore what happens at a funeral varies by the type of funeral it is.

It is a very personal decision as to what happens in a funeral and can vary from person to person.  There are no hard and fast rules on anything and should be chosen according to the final wishes of the deceased or their close family.

As it varies, it is the deceased or family’s wishes that dictate what happens in a funeral and when and creates a personal touch.

There are many ways, now, that we can lay our loved ones to rest and what happens in a funeral depends upon what budgets people have, what they believe and how they want their final arrangements to be.

What is certain is that there is much more choice nowadays on what happens in a funeral than in previous times.  People can choose pretty much what they want and any funeral director will do their best to grant a family’s wishes.

Funeral ceremonies have become more personal over the years and what happens in a funeral can be traditional and more formal, or what happens in a funeral can be more relaxed, it might  include photos or slideshows of the deceased with broadcasting of the funeral service to those standing outside the place in which the funeral service takes place or it can be broadcast to those that are unable to attend.

If a person has decided in advance of what should happen at their funeral, they are likely to have hymns or songs, prayers, readings and poems confirmed prior to their death and recorded as part of their last wishes.  However, there are a number of people that do not discuss this with their loved ones before their death and so the next of kin or loved ones of the bereaved are left to decide on exactly what happens in a funeral.

The order of what happens in a funeral is discussed and agreed between the family and the funeral director and / or clergy so that the send off for a bereaved loved one can be just how the family hopes for.

It may be that those not attending the funeral line the funeral procession’s route, in part, to pay their respects.  It has been known that a wall of honour, in which a group of people that respected the deceased might clap, as a sign of respect, whilst the hearse drives through.

Upon arrival at the venue, the deceased’s next of kin often walk into the place in which the funeral service takes place (following the pallbearers carrying the coffin in first) before any other people and take their seats in the front rows so they are closest to their loved one’s coffin.  However, it is a personal decision for them to decide what happens in a funeral.

The funeral service usually takes around 30-45 minutes and is led by a clergy or celebrant.  The length of service is, again, up to the discretion of the deceased’s next of kin (and dependent on the number of chosen hymns or songs, prayers, readings, poems and eulogy), however, there are some religious denominations that conduct longer services and that might indicate what happens in a funeral.

It is worth nothing that although it is a personal choice, some faiths or religions may dictate what happens in a funeral more than others.

If the deceased is to be cremated, the deceased’s next of kin may prefer a private cremation to take place, with select and direct members of the deceased’s family in attendance only, or they may invite the whole congregation to a burial that takes place in a cemetery, if that was the choice of the deceased.

During this time, what happens in a funeral is that guests that are not attending the committal may congregate at a venue of the deceased’s family’s choosing and wait until the direct family members arrive after committal.

After the funeral and committal, what happens in a funeral is that guests often travel to another place at which a wake will take place so the deceased can be celebrated in a less formal environment by those that have attended the funeral.

Stories are often retold and memories relayed to those in attendance so they can celebrate the life of the deceased and personally offer their condolences to the deceased’s family and next of kin.