Funeral Customs Around the World Albania 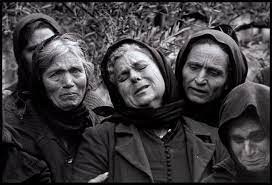 The traditional graves of Albanians dating back to as early as 1650 BCE are still evident in modern times.

These can be identified by the grave mounds that traditional Albanians buried their deceased loved ones.  Pits were dug into the rock and the bottom of the grave pits was layered with small stones for the deceased body to be laid upon.

The walls of the grave were made up of clay, timbers and slabs of any other material with dirt being added to fill the grave pit.

The external walls of the grave had a circle of stones encircling it with the stones being etched in detailed and elaborate artwork that formed the headstones of the graves of the deceased.

Traditionally, the deceased people of Albania had their prized and personal possessions buried with them, such as jewellery and bronze weapons.

The other form of traditional burial in Albania were called Tholoi chambers.  These chambers, also known as beehive chambers, were made up into a sunken mountain edge.  There were large stones arranged around the edges that resembled beehives.

A small doorway, with a triangular sign pointing upwards above it, allowed access to the burial chamber with the triangular symbol representing the holy trinity or it being denoted as a symbol of the site being spiritual.

The funeral rituals and traditions in Albania have changed since then.

In more modern times, it is customary for an Albanian funeral to take place at the family home of the deceased person or in a church.

The funeral service often includes a close family member or loved one of the deceased person to deliver the eulogy in honour and respect of the deceased.

The deceased person is sometimes positioned in a sitting position on a chair at their funeral service in order for family members and loved ones to be able to see them and say their final farewell to them.

The funeral procession takes place for burial to take place in a graveyard after the funeral service as it is unusual for Albanians to be cremated.

The burial of the deceased in Albania takes place within twenty-four hours of the deceased person’s passing, taking place either the very same day or the day after, depending on the time the person died.

The tradition of the deceased person being buried with significantly important items to them continues in today’s Albanian funeral rituals, with people being buried with what they or their loved ones or next of kin choose.

It is believed by some Albanians that having a wooden cross laid on the top of their grave will protect their deceased loved from turning into a vampire.  There may be stones present around the graveside of the deceased person which allows them to be guided to the afterlife more easily.

There is a common belief in Albania that if a good person dies, they will experience an easy death.  However, if an Albanian person is deemed to have been bad in this life, it is believed they will suffer a hard death.  There is also a wide belief that, when an Albanian person passes away, life leaves them through their mouth.

It is still a tradition today in Albania that Albanian polyphonic music is played at funerals of the deceased (as they are at other significant life events such as weddings), that follows a song with two verses, often performed by men and are more common in the northern and southern parts of Albania that in other areas.

Whilst some of the rural areas in Albania still hold traditional mourning rituals after a loved one has passed away, the mourning period in Albania often last for forty days after the passing of a person.

Folklore has it that more traditional mourning rituals that do take place in more rural areas of Albania include those who mourn their deceased loved ones cutting or tearing their hair out, wearing their clothes inside out, wailing heavily and self-harming (visible scratches on their faces are commonplace) to demonstrate the pain that the deceased person may have suffered.

It is often females that perform these rituals and some Albanian families may choose to hire professional female mourners to carry out these traditional, more physical rituals.

It is important to note that whilst this is documented, the more physical traditional rituals described by some has also been refuted.  There are reports that Albanians do not tear their hair out or scratch their faces.

It is confirmed that those Albanians in mourning do cry very loudly and choose to wear black for the mourning period.  They may also decline to listen to music or dance at any weddings or other joyous events for at least a year after a close family member has died.

It is well reported that Albanian funerals are large affairs, at which thousands of people can be expected, so they can pay their respects and pay for the deceased person’s soul, with the belief being that the more prayers being said for a deceased person, the more likely their soul will go to heaven.