Funeral Customs Around the World Mexico 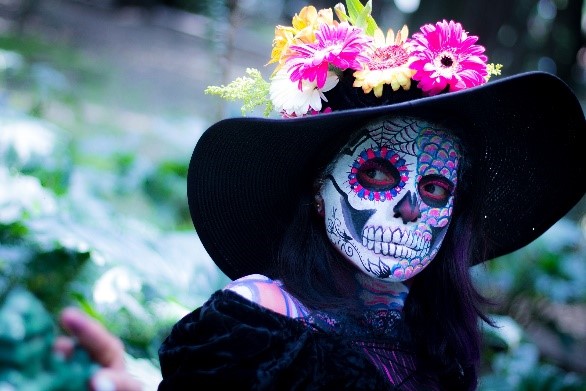 Mexico demonstrates a culture like no other where death is concerned.

‘Día de los Muertos’, translated as ‘Day of the Dead’, is a well-known and historic Mexican holiday that is celebrated at the beginning of November for two days on 1st and 2nd November with the first being All Saints Day and the second, 2nd November being All Souls Day and recognised as a statutory holiday.

This was established in the 1960s, at which time the Mexican government decided it 2nd November should be a national holiday due to their educational policies.

Día de los Muertos is celebrated as a reminder that until a deceased person’s name is never said again, they have never really died.  There is a deep sense of closeness to deceased loved ones during The Day of the Dead.

Death in Mexico is seen as synonymous with festivities during this annual event, in which people bring offerings that are placed on altars with elaborate decorations, some of these might be items or things that were loved by the person who has passed away (including their favourite food and drink and music) and the altars that are adorned with decorations and sentimental items are as individual as the person that has passed away.

The altars with these offerings act as a way of honouring the deceased and it is people’s beliefs that the souls of their loved ones’ spirits return so those that are left living can feel closer to them momentarily each year.

Stories of the deceased are often recited, music played and it is a time for merriment, as it was during the times in which the deceased were living.

It is traditional that symbols come about leading up to the Day of the Dead, in which food such as coffee cake (called pan de muerto) and sweets are made that follow the symbolisation of skulls, bones and death figures.

The shops are adorned with decorations and these symbolisations, which may seem to be macabre to those that aren’t part of the Mexican culture, however, are very natural for Mexicans who believe there is a continuum of birth, death and rebirth, show just how popular and important the festival of Día de los Muertos is.

The Mexicans do not see death as anything other than part of life; and they traditionally believe that it should be a big deal.  By simply moving onto a different stage, the deceased loved one can be celebrated fully during the annual festivities.

The Mexicans are deeply religious and their values and beliefs are not lost in the festivities of Día de los Muertos, and although the way in which some families show their grief at the time of a loved one’s passing, the Mexicans tend to share their grief openly and celebrate their deceased loved one at funerals rather than grieving more solemnly.

Candles are lit whilst the graves and altars of a family’s deceased loved one is prepared.  When the time comes, the family can come together, say prayers and chant for their deceased loved one as the bells in the town or village they reside ring every thirty seconds from 6:00pm onwards.  This is to summon the dead and this lasts until sunrise.  The night-long vigil stops as the bells become silent again, a prompt the loved ones of the deceased can return home.

The festivities of Día de los Muertos made its way, as a tradition, in the United Nations Educational, Scientific and Cultural Organisation’s (UNESCO) ‘Representative List of the Intangible Cultural Heritage of Humanity’ in 2008.