Funeral Customs Around the World Qatar 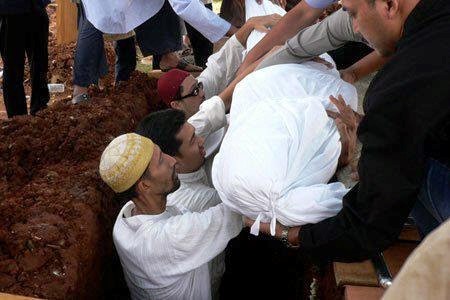 As in other Muslim countries, Qatar is one that the culture and traditions are followed according to Sharia Law / Islamic traditions.

Whilst death is seen to be quite different in Qatar than that in western countries, there are a few similarities.

Similar to other Muslim countries, the Qataris bury their dead as soon as possible after death has taken place.

In preparation for the funeral, Qataris will cleanse the body of the deceased a specific number of times, always an odd number, and typically three times.

After the death of a person, the eyes and mouths of the deceased are physically shut.  Their body is then completely covered and wrapped in plain white cloth called a ‘kaffan’.  This is not extravagant and the Islamic tradition of not burying a person in or with anything expensive or extravagant is followed.  The thinking in Qatar is that a person does not need anything valuable after they have passed away.

The Qatari culture and tradition considers all people as equal with the belief that all Muslims should be buried in exactly the same way.  There should be no difference between the rich and the poor, a deemed to be important person or a less important one, a ruler or a normal citizen.

There is a distinct difference between a funeral burial and a funeral mourning in Qatar.

A burial in Qatar is seen as a community event.

People come together to attend as a sign of respect.  It may be people that have known the deceased person for a long time, they might have lived in the same area for a long time, or they may not have even known the person who has passed away but knows of them due to the community in which they lived.

In Qatari graveyards, there are no signs of tombstones or gravestones and coffins are not used.  This is because the Islamic tradition is believed that people should not return to a graveside to speak to the dead.  Instead, the deceased loved one should be remembered at home.

Upon their death, a Qatari national is allocated a plot of land in which they are buried; they cannot choose where the location of their plot is and the Islamic culture believes this is unimportant because, after death, it does not matter where the deceased is buried.

A person is then buried with their head facing Mecca in accordance with Sharia Law and Islamic tradition.  A prayer called a ‘Dua’ is recited in which people attending the funeral burial are asked for the deceased person’s sins to be forgiven.  Not only is the deceased person’s close relatives and family asked this, it is seen to be important that all friends and family of the deceased and those attending the funeral burial are asked to do the same.

This funeral prayer is done in a communal way before the deceased person is lowered into the big open space that has been purposely created for their burial.

The deceased person is laid to rest within the pit but the earth is never patted down, in fact, the graves in Qatar and other Islamic burial places are created as mounds.

No women attend funeral burials in Qatar, it is only men that do; and whilst crying is accepted during a funeral burial and is considered normal, wailing is not something that is permissable culturally.  Cremation and embalming is also not permitted in the Muslim religion and is not done culturally.

The mourning period in Qatar typically takes place in a tent that is created by the family of the deceased.

The tent allows relatives and other family memers to pass by and visit, to pay their condolences and share stories of the deceased.

There are particular phrases those visiting the mourning tent might say to the direct family members of the deceased and mannerisms they may display in Qatar.

One of the exchanges between the visitor and close family relative of the deceased might include the visitor saying something like: ‘May God have mercy on the deceased and may he give you strength at this difficult time.’

The mourning period is not a time or place in which  people sit around feeling depressed.  It is a time and place for people to share their condolences with the deceased person’s family but also to remember the person’s life and celebrate it.

There is no time restriction that a person should stay in the mourning tent, it is just seen as culturally correct to pay a visit, pass on their condolences and share their time with the family members of the deceased, which means a lot to the family.

The Islamic traditions that are followed in other Muslim countries follow in Qatar.

A respect for the deceased is very much a community affair and there are certain procedures to follow upon a person’s death.