Funeral Customs Around the World Taiwan 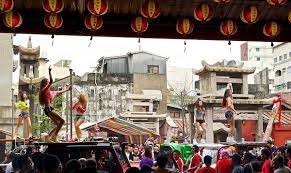 Funerals in Taiwan can be large affairs.

Traditional Chinese customs are often followed in Taiwan and the main religion they follow is Buddhism as the Taiwanese honour their Gods and ancestors.

Once a date for a funeral ceremony is chosen, which tends to be auspicious because the Taiwanese are superstitious, processions and ceremonies take place on streets, in people’s homes and in temples to help the deceased person journey on to their afterlife.

If a person dies in ‘the wrong way’ or at the ‘wrong time’, the Taiwanese will do everything they can to be able to counterbalance this and do right by their deceased loved one.

The majority of Taiwanese are Buddhists and so it is not unusual for Buddhist Monks to read scriptures for a long period of time before a person’s funeral in order to help the deceased person’s soul travel safely on.  The faith and devotion of Buddhism allows for people to continue to carry out good deeds for a person so they, themselves, are reincarnated when they die.

Together with Buddhism, the faith the Taiwanese follow includes: Taoism, a religion and philosophy that originates from ancient China and has influenced folklore and national belief in an indigenous spirituality and Christianity.

The pre-funeral events and the funerals themselves are often closely linked to a person’s status or wealth so the bigger and more expensive the funeral, the richer and status driven the deceased person was considered.  Funerals in Taiwan can cost a lot of money and sometimes just under half of a person’s annual income.

It has been known that people are hired to wail into loudspeakers as a funeral procession passes, to ensure grief is audibly expressed, women wearing little clothing draw in crowds as they sing, paper objects are burned and if the deceased was, for example, an influential business person, their procession may follow with a long fleet of expensive cars.

The burning of artificial money (referred to as ‘ghost money’) is performed during the mourning period  and is derived from a ritual undertaken by people that follow Taoism, Buddhism and traditional folklore with the belief that by burning artificial paper money signifies an offering and can be done at a person’s graveside after their death as well, which allows the deceased person to use that money in the afterlife.

Rituals continue during the funeral processions and ceremonies as traditional wooden carvings adorn doorways of temples and churches so people can enter and pray for eternity.  There are many people out and about in the community and people come together to visit these venues and eat street food afterwards.

Real money is often given, by funeral guests, to the family of the deceased person in odd denominations either at the funeral ceremony itself, or the day before the funeral, in a white envelope that may or may not have the donor’s name on it.

Colour is significant at a funeral in Taiwan.  Whilst black is acceptable for mourners to wear attending a funeral and often is, the colour of mourning, that can be worn by the people attending a funeral ceremony, is white.  The exception to this is if the deceased person died of natural causes at an age of older than 80 years old.  In these circumstances, the event can be seen as a celebration so pink or red (a colour of real celebration) might be acceptably worn.

Cremation is the preferred option for the deceased which is mainly due to the lack of burial spaces available.  Once cremated, the deceased person is put in a special urn and placed in a Buddhist temple.  Those who do choose to be buried have a defined seven year period of being able to have the grave.

On the seventh day after a person’s death in Taiwan, a ritual called ‘Tou Qui’, pronounced ‘Tow Chee’, takes place at which the deceased person’s spirit is believed to return to the relatives they have left behind to bid one final farewell.

Food, such as cake and fruit, together with burning incense and decorative flowers are presented at the ritual so that the thoughts of those present can be presented to their God.

All doors and windows are opened, including drawers and car doors, so that the spirit of the deceased person can easily visit this last ritual before an all-night vigil takes place so that the deceased’s loved ones can remember them in their own way.

The vigil ends as the sun rises and the lit candle burns out and the smell of the incense disappears.