Funeral Customs Around the World Uganda 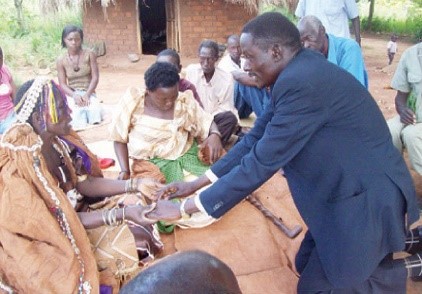 Funerals in Uganda can be audible from a distance, as wailing can be heard by mourners, those of which are sometimes hired as ‘professional mourners’ who can also roll around on the ground as the casket of a deceased person is lowered into the ground.

Most funerals throughout the regions in Uganda are similar, however, there are slight differences within the different cultural traditions that differentiate some funerals from others.

One region may expect the whole village and community to become part of the funeral by pooling money to assist with the cost, view the body of the deceased and, if the deceased person is male, his household of children shave themselves in preparation for the rituals of inheritance after the burial.

If a woman in certain Ugandan regions dies without having had children, a banana stem that represents a husband, is buried with them, together with a broken egg on her stomach.  A childless man is buried with a banana stem that resembles a woman; both rituals believed to be able to satisfy the ghost so they are not haunted.  Both childless adults might be taken out of their house through the back of their house because it is often viewed as an abomination to not have had a child so the deceased are not treated with dignity or respect.

Another region prepares their deceased by trimming their body hair and preparing the body for burial amongst the same sex adults of their dead relative.   The water in which the deceased person is washed is done over banana leaves and must remain in the room before the evening of the deceased’s burial.  Should an adult male not have been already circumcised, this takes place at this time before their burial.

It has been reported that some traditions demand that a widow or widower dresses their deceased loved one in their underwear to be buried.  This is done because it is believed that their ghost might be tricked in thinking the couple have been buried together and will not haunt the remaining individual of the couple, especially during future sexual intercourse they have.  By burying their own clothing with a deceased spouse, it is a symbol that they are not going to be separated by death.

It is a common tradition to wrap the deceased in a cloth, and then a black cloth and it is often the case that the funeral rites are held much later than during the burial ceremony.

At this time, the person of inheritance (the heir or heiress) also wears black cloth and the heiress carries a knife and a basket and an heir carries a spear.

Traditionally, much alcohol was consumed and there was unlimited sexual intercourse that took place during this time because, culturally, the Ugandans believed that by procreating, the deceased person was able to be replaced.

Funerals in Uganda can be expensive and so many people cannot afford them; and funerals that are managed by funeral directors are often elegant affairs.  This is quite different from the traditional belief that mourners should wear old and often shabby clothes and keep themselves unkempt for the burial ceremony to publicly show they are in mourning.

A funeral procession in Uganda can often be recognised as a siren can often be heard to clear the way for the hearse to follow and the relatives after that.

After a Catholic funeral takes place in Uganda, the neighbours and friends of the deceased gather in their yard, where a fire is lit, for four days and nights to keep the bereaved family company.  They remain there day and night for this period of time so they can pray, comfort and grieve with the family.  The fire is a symbol of the deceased spirit being burnt away and on the last day, a celebration takes place, at which time the final formal funeral rites take place.