Is funeral and burial the same thing? 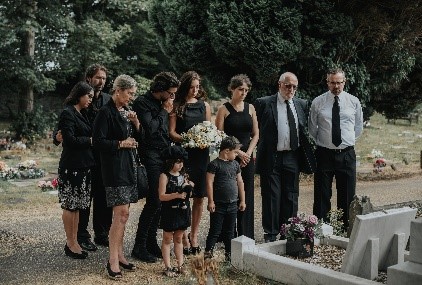 A burial is a type of funeral of which there is more than one type.  The burial is often described as the short ceremony that takes places after a funeral ceremony at which the deceased is lowered into the ground if they have chosen to be buried.

Not necessarily is funeral and burial the same thing because the committal is the act in which the deceased is buried, at which time people in attendance can say their final goodbye before the coffin is buried.

When asked is funeral and burial the same thing a burial (also referred to as interment), it can be described as the act or ritual in which a deceased person is laid to rest, sometimes with their favourite possessions, whilst a funeral is the service or ceremony in which the deceased is honoured and celebrated.

There can be a distinct difference in tone when looking at is funeral and burial the same thing.

The funeral ceremony itself can be an upbeat celebration with songs, prayers, readings and anything that the deceased’s next of kin and family wish to have included.

The burial element that takes place after the celebratory event of a funeral ceremony can often be sombre, even thought provoking, and it is a distinct visual reminder that this act is final and that when the coffin is lowered into the ground, once the burial takes place, there is nothing more that can be physically seen to those in attendance of the person who has died.

Many people asking the question of is funeral and burial the same thing, they would consider that the burial is part of the funeral.

However, it is possible to have a burial without a funeral and direct cremation as an alternative at which the deceased is taken directly from the mortuary to the crematorium without a funeral service so when considering the question is funeral and burial the same thing, it is not necessarily the case.

This might be within the church grounds of where the funeral ceremony took place, it may be at a different location and that will depend on the deceased’s final wishes, what arrangements have been made by the next of kin or their family and what they have agreed with the funeral director.

Prayers and readings can take place during both burials and funerals.  It is often a time of reflection of all those people in attendance.

Whilst people have the opportunity to pay their respects to the deceased when they attend their funeral, they can remember them in a moment of solace and offer their condolences to the family and next of kin of the deceased.

They may also take the opportunity to reflect on their own lives and use the experience of attending the funeral as a way of changing things about their life that they feel might be needed, remember their time with the person who has died and how they had an impact on them and learn to forgive any people they feel have wronged them in the past.

Many people ask is funeral and burial the same thing and whilst there are many types of funeral, burial is commonly described as the act that takes place when laying a person to rest.

The act of lowering a coffin into the ground can feel dramatic to most, the visual ‘end’ and final goodbye can be an emotional experience for those in attendance.

The budget of the deceased or next of kin is often relevant when questioning is funeral and burial the same thing because it is the most expensive way to lay a person to rest.

In the UK, the cost of a funeral ceremony followed by a burial will depend upon many factors, including: the location of the burial place or cemetery, the type of funeral ceremony that is chosen and all the additional costs such as the type of coffin, the flowers and the wake that is more often than not organised for after the funeral and burial.

Whilst answering the question of is funeral and burial the same thing, burial can be seen as part of the funeral ceremony as a whole, or the actual act of committal or interment after a funeral ceremony.