Funeral Customs Around the World Bahrain 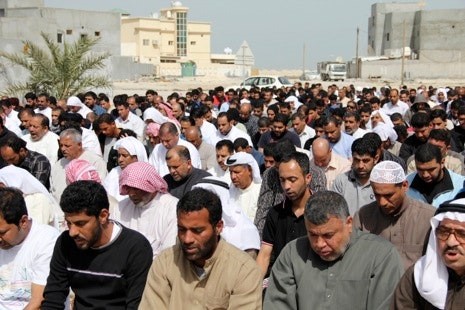 The majority (almost three quarters) of Bahrain is made up Shi’a Muslims, with fifteen percent being Sunni Muslims and fifteen percent that make up the Christian or Jewish religion or faith.

With the population following Islam in the main, there is not a huge acknowledgement of death, nor does pomp or ceremony take place when considering funerals in Bahrain; and it is customary that a deceased person in Bahrain is buried with a very simple gravestone that faces Mecca.

If someone deemed to be important in Bahrain dies, it is often the case that their house is closed up for a particular period of time.

In Bahrain today, there is still evidence of the thousands of low, cylindrical towers, that scatter the arid landscape in which the early  Bahraini people, who were part of the Dilmun civilisation, buried their deceased loved ones around four thousand years ago.

It is significant to note this because the Dilmun civilisation was powerful and controlled the Arabian Gulf’s trading routes.  To this day, the Bahraini people refer to this civilisation because it was seen as influential.

Due to the Dilmun civilisation’s importance, interesting discoveries have been made of the Dilmun graves that can teach us a lot about the life and death of the Bahraini people from ancient times.

Figurines have been found in the graves of the deceased in ancient Bahrain.  Some have been of wailing women, mourning for their deceased loved ones and are made up of plasterwork, painted as if they were dolls, illustrating expressions on their faces and dressed in appropriate attire from that particular period of time.

It is evident that the people of Bahrain placed a huge importance on the care of their deceased loved ones by discovering what was buried with them, with the belief they were entitled to renewed life after their deaths.

Valuable artefacts, such as jewellery, have been recovered and have become the permanent collection within the Bahrain National Museum, as some of the discoveries are more than two thousand years old.

During the discoveries, there have been a number of limestone slabs, or ‘steles’, found and this demonstrates that those of ancient Bahrain had a desire to present themselves upon their death in a certain way.  These limestone slabs were placed at the graveside of the deceased or they were found in small enclosures within he graveyard.

As time passed, in the early Tylos period, a simplistic human shape took form and these were known as ‘nephesh’ (or breath in Aramaic) that acted as a memory of the soul of the deceased person.

These ‘nephesh’ became more ornate and elaborate over time, with both sexes of men and women being represented and were created with full faces with more intricate designs, such as in postures of prayer, their right hand being raised with their palm facing forward, and so on.  One such figurine has been discovered and is that of a woman in this position with her jewellery carved into the design highlighting that, over time, the figurines have become more elaborate and ornate.

In a grave of an adolescent girl a figurine toy made of bone was found, whilst other graves included ornaments made of ivory, glass perfume bottles and make up cases, all of which were surprising to have been found from ancient times.

Those who attend a Bahraini funeral are often those who are very close friends or family of the deceased person.  Because there is little ceremony made of such occasions, the Muslim faith can carry out the traditional funeral rituals that are well known quickly.

First, the deceased person’s body is washed, usually at home but this can also take place in a mosque or at the cemetery.  The deceased person is then covered in a shroud with their head covered.

The narrow grave is then blocked with pebbles and sand then filling the hole.  Just before this is done, the cover that has been placed over the deceased person’s head is removed so they are able to ‘see’ Mecca once they are buried.

After the funeral, it is rare that men visit the gravesite of their deceased loved one and women never do.

Whilst non-Muslims are welcome to attend a Bahraini funeral, they must stand to one side and not take part in any part of the funeral ceremony itself.

Although the widower of the deceased Bahrain person does not have a defined mourning period imposed, they often seclude themselves for four months and ten days.

It is known that if a widower looks at a male who is not a family member after her loved one’s death, she must wash herself in a particular way in order to be purified.

Shorter mourning periods are observed for other relatives of the deceased person and no public grief is apparent.

The mourners who attend a Bahraini funeral offer their condolences by saying a phrase which means: ‘May God greatly reward you for your loss.’